I am not, strictly speaking, a “sci-fi” fan. As a genre, I think it’s mostly okay with a few standouts. My mother and sister are very into sci-fi so naturally being the teenage rebel that I was, I had to go in the complete opposite direction and devote all my time to watching movies that were firmly set in OUR world, on this PLANET, featuring REAL people doing MUNDANE things and discovering long-buried TRUTHS about themselves. I think we call it mumble-core now. But that was my jam all through high school and most of college.

All that being said, I have always had a soft spot in my heart for movies about or involving space travel. Now, not all of these are technically sci-fi. First Man and Hidden Figures certainly aren’t and they definitely count. And then you have something like Armageddon which, I mean, I don’t even know what you call that. It’s a space rom-com, I guess? And then you have space horror, like Alien, which is also sci-fi, kind of. I’m going to present a well-rounded top five but if you’re curious what almost made the cut, you can click this link. Also if you don’t already have a letterboxd account, go make one right now and follow me.

Some people look at Bruce Willis and all they see is John McClane. I only see Korben Dallas. Time permitting, I could probably quote this entire movie to you right now. I could watch it every day and never get sick of it. Have you ever heard or seen a performance as heart-wrenchingly compelling than that of Diva Plavalaguna? Is there a funnier phrase than “Leeloo Dallas Multipass”? Is there a more well-rounded and diverse character than Ruby Rhod? Is there a more ridiculous catchphrase than “Aziz, LIGHT!”? Is there a more steadfast argument in favour of widescreen aspect ratio that the ending of this film where you clearly see the moon in the wide shot? It changes the entire narrative! Look, the bottom line is, this movie isn’t just good, it’s perfect. Just like Leeloo.

Sam Rockwell is one of my favourite actors. I think he’s immensely talented and I’m just waiting for the rest of the world to catch up. Moon is his greatest hour. His only scene partner is himself, via the magic of editing, and he still manages to steal scenes?! If you haven’t seen it, do yourselves a favour and check it out. It’s on Netflix in Canada. If you like The Martian, Oblivion, or basically anything involving the moon, I promise you will like this. Also @DuncanJones it’s not to late to replace the voice of Gerty. It’s a robot voice. Anyone can do it. I will spend money to re-purchase my blu-ray copy if you do this.

Okay look I don’t want to start a fight about what the best Star Trek movie is (it’s this one) or who the best Kirk is (it’s this one) or if this even fits into the Star Trekiverse (of course it does how dare you) because I just love this movie so much. I saw it five times in theatres. I own it on blu-ray. I once watched it twice in a row. You heard me. It ended, I returned to the disc menu, and I hit play. Again. I live for the scene where Kirk is running around being stabbed in the neck by Bones, trying to talk with numb tongue, and still saving the Enterprise in the process. I love the Kobayashi Maru test. I love every scene with Spock and his parents. I love the part where we meet Scotty for the first time. I love Eric Bana and Clifton Collins Jr. as the Romulans. I love Spock Prime meeting Kirk and trying not to tell him how much he loves him. Everything about it is so good and I just won’t hear otherwise.

First Man is getting a lot of attention this year and it’s honestly very okay but the whole time I was watching it I couldn’t help comparing it to Apollo 13… which I think is better. It’s just a better story and sorry Ryan Gosling but Tom Hank you are not. I really love Jim Lovell’s journey in this film. There’s so many great moments. The first time they realize something is wrong. Trying to build the thing to fix the thing on the ground so they could explain to the astronauts what to do in space. Jim looking out the window and watching the moon pass him by. It’s crushing to watch his dreams die, even though he’s alive and going home, his last ever chance to walk on its surface has just slipped through his fingers. 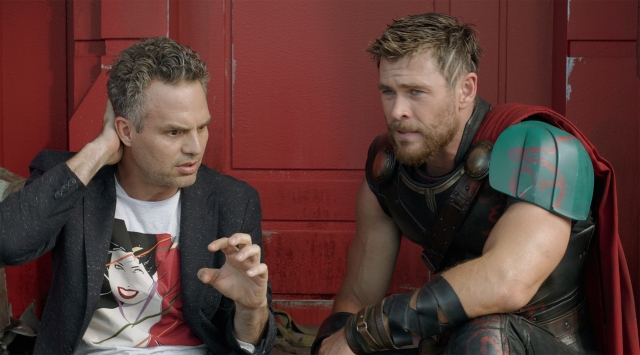 Taika Waititi is one of my favourite filmmakers so when I heard he was directing the third instalment of my favourite (yes even more than Captain America) Marvel franchise, I was elated. And I was worried. Worried that the studio would take everything unique and wonderful about Taika’s vision and voice and squash it to fit their pre-destined plan. And they were releasing the movie on my birthday so it was either going to be a glorious addition to that blessed day or a bitter yearly reminder that we can’t have nice things and to never trust anyone. Thankfully, it was the former. Thor: Ragnorok finds our hero shorn, hammer-less, and stranded on a planet run by Jeff Goldblum, eager to return to Asgard to fight his evil sister Cate Blanchett. He teams up with The Hulk and a former Valkyrie that goes by the title Scrapper 142 and arrives at some closure with his brother Loki (just in time for the events of Avengers: Infinity War..) while Idris Elba chills at home, working on his dreads. It is the most fun anyone has ever had watching a Marvel movie and look, if you’re not on board with these things by now, I really don’t know what to tell you. I love action and I love to have fun and I love space! I really hope Chris Hemsworth decides to continue making Thor movies if Taika stays on but if not, we’ll always have Ragnarok.